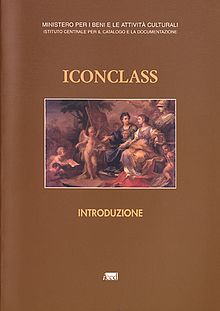 I attended the first Iconclass Expert Meeting since 1989. It was held in the RKD in The Hague, and iconclass experts were in attendance from the Netherlands, US, UK, Germany, Belgium, Poland, Portugal, and Chili. Representing the founding father of Iconclass, Henri van de Waal, were Etienne Posthumus (who created the online Iconclass browser, making international collaboration much easier) and Hans Brandhorst (the only attendee who attended the last meeting in 1989). An iconclass expert was loosely defined as someone interested enough in the challenges of cataloging iconography to want to hit the edit button in the iconclass browser – sound familiar?

Most attendees presented on their various subjects of interest, and I presented some of the work done on importing iconclass codes into Wikidata items for Rijksmuseum paintings. There is great work being done by various atttendees on systematically creating iconclass codes for their areas of expertise. For example, the art historical discussions between Portugal and Brazil in iconclass circles are very much like the edit wars Portuguese and Brazilian Wiki(p/m)edians have. It turns out much of these disputes are based on incorrect assumptions about local interpretations of religious concepts. Much work has been done to create iconclass concepts for local saints and traditions that are echoed in centuries-old iconography in local art. Similar work has been done in Poland and all groups have tried to partner with student populations to do the much needed work of cataloging and assigning codes.

Both the Rijksmuseum and the Marburg bildindex have made the hard work of cataloging imagery into something of a science with planning mechanisms that time how long it takes to assign 3 iconclass codes to a catalog object in their database. Happily for us, everyone links out to Wikipedia when they can’t find the proper code in iconclass. When I showed how it was possible to add iconclass codes to Wikidata painting objects, I received a lot of requests to have Wikidata items for prints. We already have items for prints that have Wikipedia articles, but those prints are rarely specific to one collection (unlike paintings, that are unique objects). We may eventually start a “Sum of all Prints” project, but next up would be a “Sum of all Photos” project and eventually we may have people insisting each Commons image deserves its own Wikidata item, though this could be a one-to-many relationship the way we have hundreds of images of the Mona Lisa.

The meeting concluded on a positive note with many claiming interest in an iconclass user’s group to be based on an email group. Reem Weda is the product manager at the RKD responsible for the Dutch version of the Art and Architecture Thesaurus and since so many concepts of the AAT overlap with Iconclass, it is logical that he be the local contact for Iconclass as well. He organized the meeting and is hoping to lobby internally to have more objects in the RKDimages database enriched with iconclass codes. As the formal owner of the Iconclass body of knowledge, it makes sense that the RKD should embrace it in their own online databases. Most iconclass codes in their images database come today from Rijksmuseum prints and paintings and individual RKD researchers however. Using the tips from Marburg and Amsterdam the RKD hopes to speed up the process using their developed “copy paste” methods for similar artworks. Wikidata would benefit as well from a similar “copy paste” method to add iconography standards to copies of artworks for which others have already typed in dozens of tags, whether it’s on Wikidata, Wikipedia, or Commons.

View all posts by an_bi

This site uses Akismet to reduce spam. Learn how your comment data is processed.

This blog is a place where users of Iconclass, the classification system for subjects in the arts, can share news, stories and opinions about their work and Iconclass related projects. We also repost writings about iconclass from other sources (when permitted).

Iconclass and RKD do not necessarily endorse the views expressed here.